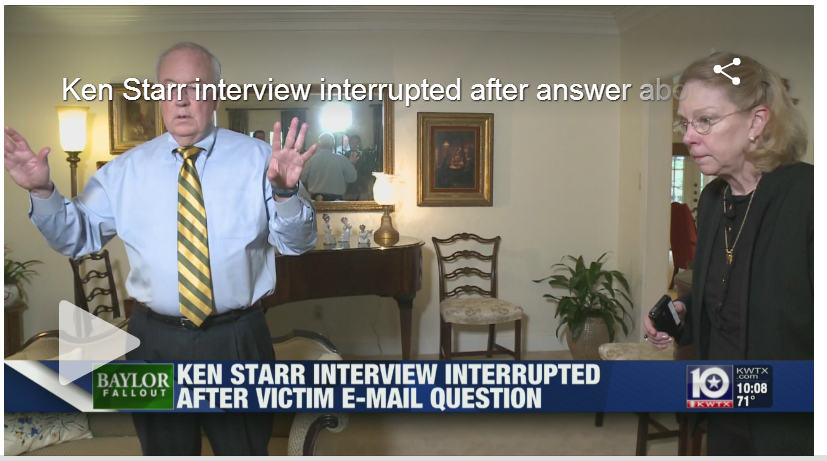 How media training became part of the story

Either way, it was the consummate example of how not to do media training, i.e., while the cameras are rolling.

A bit of background first

Ken Starr has had a long and prestigious career, including as solicitor general of the United States from 1989 to 1993, as a former special prosecutor for the Whitewater investigation in the 1990s and as dean of Pepperdine Law School. In 2010, Baylor University named him as its 14th president.

But then came the controversy about alleged sexual assaults on the Baylor campus involving football players (some of which have resulted in convictions) and how the school administration handled the accusations. When it all became very public, the dominos began to fall, including the removal of football coach Art Briles, athletic director Ian McCaw and Starr himself, who lost his presidency and shortly thereafter his chancellorship.

To investigate the allegations, Baylor hired independent Philadelphia law firm Pepper Hamilton. On May 26, the university made public the report, a summary of which “found that the University’s student conduct processes were wholly inadequate to consistently provide a prompt and equitable response under Title IX.”

The Pepper Hamilton report also found that there were “actions by two University administrators that directly discouraged complainants from reporting or participating in student conduct processes, or that contributed to or accommodated a hostile environment.”

Starr agrees to a TV interview

Following the release of an email that was written to the Baylor administration by a former Baylor student whose subject line read: “I was raped at Baylor,” Starr agreed to be interviewed on June 1 at his home on the Waco campus by KWTX news anchor Julie Hays.

Starr and Spaeth – who has an impressive pedigree of her own – including serving as director of media relations at the White House under President Reagan and is founder of Spaeth Communications, which specializes in executive training and coaching – must have known that Starr would be asked whether or not he had seen the email.

He first responded: “I honestly may have. I’m not denying that I saw it.”

That’s when Spaeth approached the news director who was present in the room to ask him not to use the response. When he refused, Spaeth interrupted the interview, telling Starr – with cameras rolling – that she needed to talk to him out of the room.

The two returned several minutes later, with Spaeth telling Hays that they had conferred because they did not want the answer to end up ‘mis-edited.’

The question was asked again. “Did you see the email?”

This time, Starr replied: “I’m honestly going to say, I have no recollection of that.”

Then Starr turned to Spaeth, again on camera, and asked her: “Is that OK?”

She hastily replied: “Don’t look at me, look at her,” referring to Hays, who asked the question a third time.

Needless to say, this was not a PR pro’s best case study of media training. And whether it was the trainee or the trainer, it does present some lessons learned on how to prepare for what was sure to be an adversarial interview.

Starr could have put off a definitive answer to the question and instead have had a prepared message that would have diverted attention away from the question. Something like, “I have always had the best interests of Baylor University at heart and want very much for this whole matter to be fully investigated. I support the recommendations outlined in the Pepper Hamilton report. And, as always, my concerns are for the students, the faculty, the alumnae and the fans.”

He could have introduced this point by using a technique called flagging, which is used to draw attention to your key messages and signal to an audience, “Here’s the important point.”

Use the right body language

Interviewees need to use sincere body language that makes their statements and sentiments more believable. It is very important to know some simple body language techniques that will let the audience know you care and that you are a likable person.

In my opinion, Starr did not look like he was taking the issue as gravely as he should have. After all, there were at least two sexual assault convictions stemming from the Baylor University allegations.

His body language showed too much levity for a situation where the reputation of the university was in jeopardy, alleged and actual crimes were committed, and several very high-profile careers, including his own, were in question.

You can view the interview here.

A surprising mistake that his publicist did make, however, was to believe that ‘off the record’ protects your statements from being used or thinking that you can take something back or have a ‘do-over.’

Sure, if you’re in a friendly situation and the media segment is about your product or service or you’re helping a reporter out by commenting on an issue of the day, chances are that you will be allowed a ‘rewind.’

But this is certainly not going to happen in an interview on ethical and criminal behavior.

Spaeth has subsequently apologized for her actions and admitted that she made a ‘huge mistake.’ The damage, however, had already been done.

That’s why it’s so important to be prepared for a media interview and to undergo extensive media training if you’re up against a difficult situation such as this.

For more information or questions about our media training services, please contact me at jwheeler@pureenergypr.com or call 512.517.6580.

Site by Agents of Creative